This feature article which is written by Aquarzon will explore the top 4 aquatic fissidens originating from US and Australia, along with aquascaping tips. After years of propagating and long-term observations of more than 40 types of aquarium mosses and fissidens at Aquarzon, we would like to share with you and fellow hobbyists the top 4 aquatic fissidens which can be easily grown in fish and shrimp aquarium tanks.

There are easily hundreds of species of fissidens across the world but only a small percentage of it are truly aquatic and suitable to be used as aquarium plants. The United States of America and Australia are blessed to have some of the most beautiful fissidens in the world which are truly aquatic.

The following below is the list of our top 4 true aquatic fissidens based on their beauty, growing pattern, aquascaping use possibilities, ease of growing and level of care required. All 4 of this happens to originate from the United States and Australia.

(known as 'Fissidens Fox' in Australia) 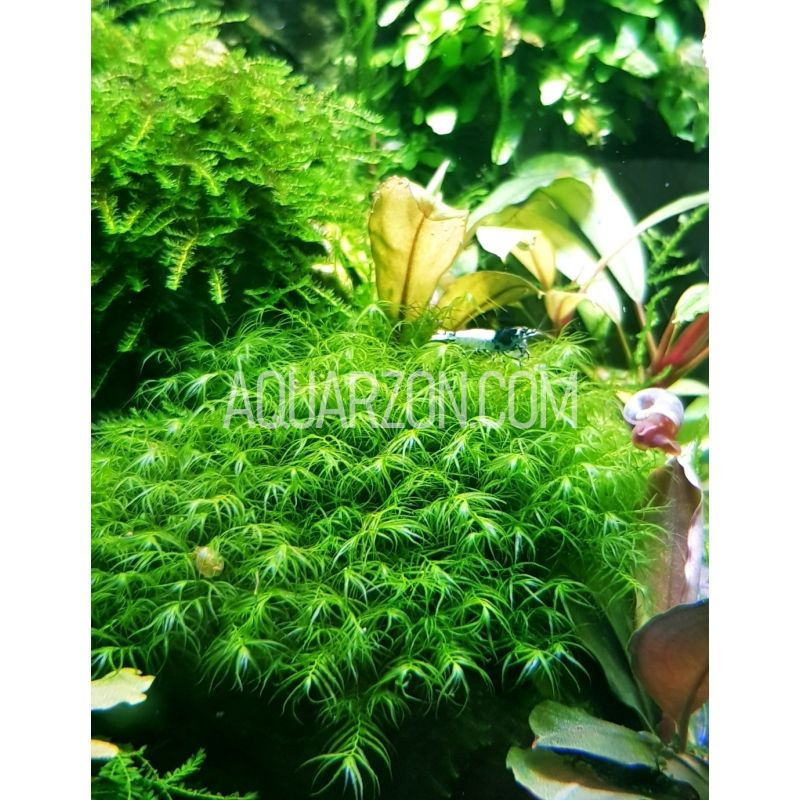 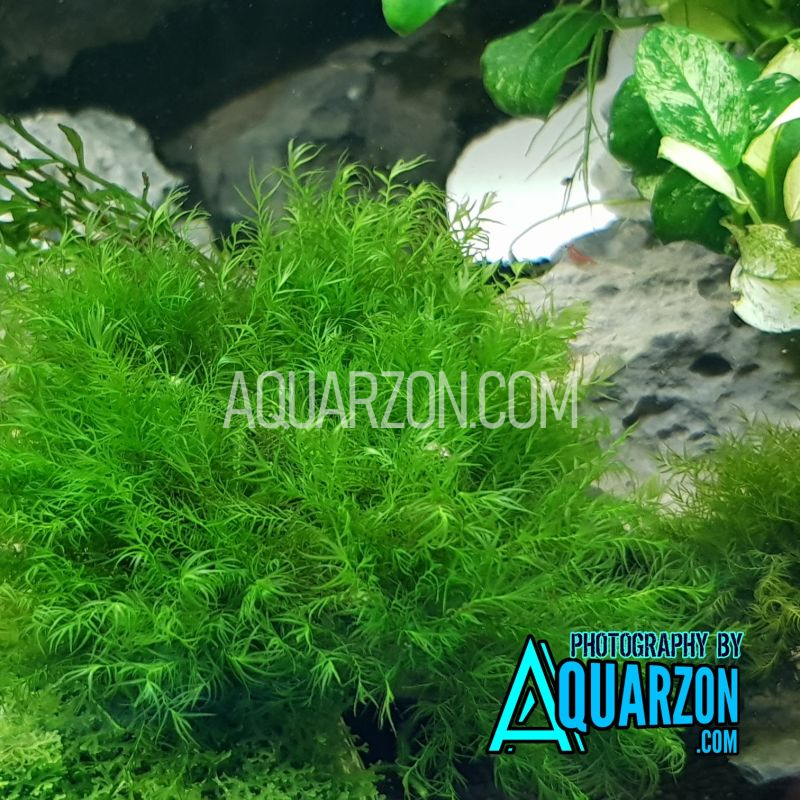 This fissidens was originally found naturally growing in North America.

Compared to other aquarium plants and fissidens, this fissidens which is known as Fissidens Fox in Australia is much less common. In Australia, it one of the newest fissidens in the aquarium hobby trade as it was traded mostly starting from 2018. In 2018, it was considered extremely rare. It is still relatively newer compared to quite a number of other fissidens and is still considered very rare in 2019 and is expected to be for the next year ahead. As it grows quite fast, it is expected to be more available in the coming years.

It grows lush into a relatively big bush over time, at a medium to fast growth rate.

We recommend using this fissidens for areas that requires a larger bush of fissidens as it will grow bigger than the others.

For aquascaping purpose, this fissidens would create the effect of a very lush and beautiful bush, a bush filled with delicate and fine foxtail-pattern leaves.

It is very good to be used to create illusions of a bushy clump of leaves in an aquascape.

If you have an aquarium with rocks instead, it can be placed in a few different ways. Firstly, if are using rocks such as Seiryu, Yingshi, Dragon stone, Pagoda and Texas Hollow, this fissidens can be positioned in the gaps or holes of the rocks. This is easiest as in most cases, you can just gently wedge it in without the need of attaching with nylon, cotton or aquarium glue. This would create the effect of a natural rocky mountain with plants. If you prefer a fuller effect, you can create a fully covered mountain effect by attaching this fissidens on the entire rock. It is best to choose a rock with a broader base and sharper peak to create this fully-planted mountain effect.

Or if you have an aquascaping with driftwood such as Goldvine, Malaysian driftwood and Mopani, we recommend attaching it to the branches of the wood to create the 'bird's nest' effect. If you had the chance to walk into some jungles and forests, it is a common sight to see clumps of secondary plants that grow on the branches of the trees or even bird nest. This fissidens enables you to recreate this effect and you can do it by attaching it to the mid area of the branches.

For aquariums without driftwood such as the standard Japanese Iwagumi or even aquarium without any specific theme or style, this fissidens can just be positioned freely in the foreground or midground region. In most cases, it is best to have a few clumps together rather than having individually positioning single clumps in separate locations. It can be held down by putting a bit of substrate over.

(known as 'US Fissidens' in Australia) 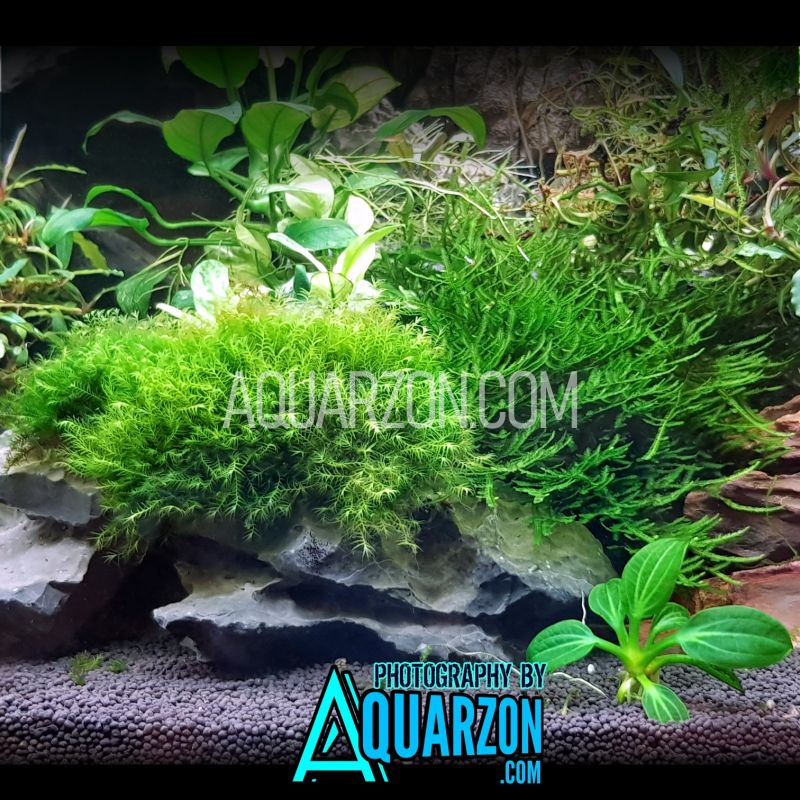 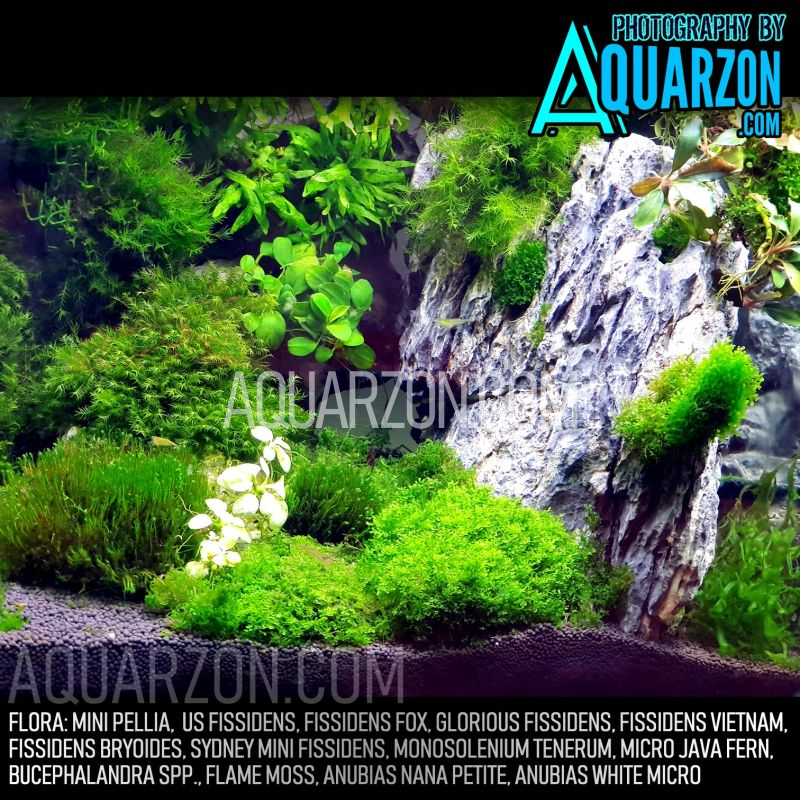 This fissidens is also found in North America.

It is an extremely popular aquarium plant and is widely used in US, Australia, Europe and Asia including Japan especially for nature style aquascapes. It is known as US Fissidens in Australia.

This fissidens grow at a medium to fast growth rate, depending on aquarium conditions.

The main difference would mostly just be the effect created.

In our experience, we recommend this smaller variant over larger variant for fully-covered planted mountain effect because this fissidens grows more compact.

It is also excellent to be attached to cover a long piece of driftwood or branches.

We suggest that if making the illusion of trees in an aquascape, one great way is to use mosses (such as Weeping Moss, True Peacock Moss or Mini Taiwan Moss) on the end of the branches to create the illusion of tree leaves while this fissidens can be attached to cover other parts of the branches to create a natural and gorgeous green effect. It can be attached using aquarium-safe superglue or nylon string (just put the fissidens in place, then twirl the nylon string around the branches with 0.5cm-1cm gaps, then tie at both ends). In the jungle, some trees have branches and tree barks which are covered with greens and this can be replicated using the above technique. While it is optional, it would be stunning to add a few clumps of the larger variant of this fissidens at or near the joining part of the branches and bark of your 'tree' to create the bird's nest illusion effect which would give a really beautiful and natural jungle tree appearance.

If you need a fissidens to just create some bush effect on your foreground or substrate, you would be better off using the larger variant because that has more volume.

For other uses such as attaching to driftwood and filling between gaps between rocks, both can be used depending on whether you want the effect of a bigger and more lush bush or whether you prefer the effect or a smaller and more compact bush. If the gaps are smaller, then this smaller variant would be better. 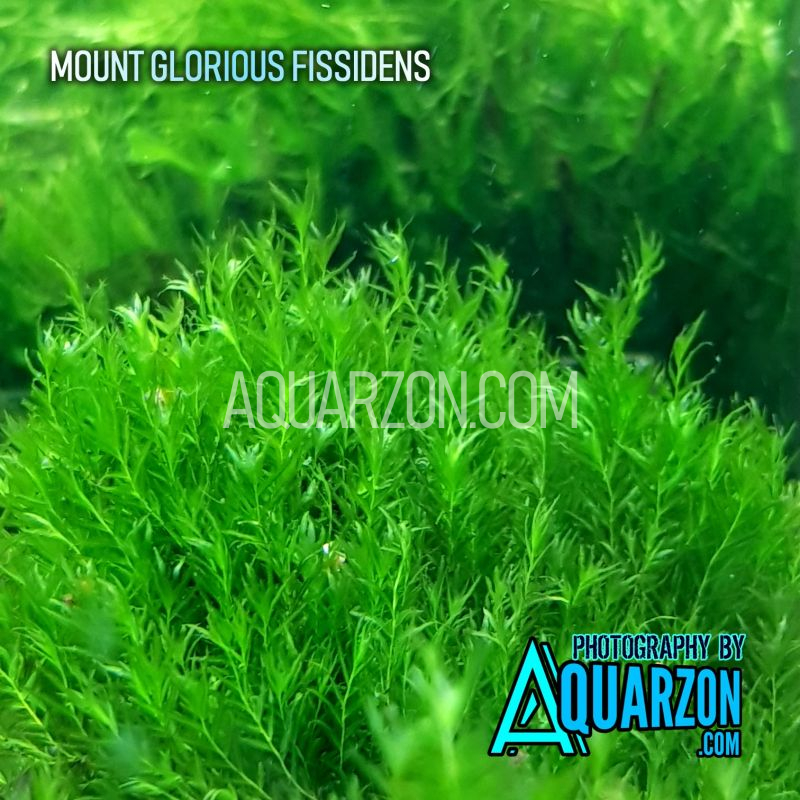 This Australian native fissidens is found in Mount Glorious, Queensland.

Queensland has a warmer average  temperature compared to Melbourne, Sydney, Perth and Adelaide.

The Queensland Mt Glorious Fissidens (Fissidens Berteroi) grows in a vertical direction compared to US Fissidens, Fissidens Fox and most other fissidens.

We also observe this fissidens as having a slightly brighter and lighter green tone compared to US Fissidens and Fissidens Fox in most situations.

In our opinion, this Queensland Mount Glorious Fissidens is one of the most underrated fissidens and this is largely due to the fact that of below reasons:

- Lack of availability in the aquarium hobby trade. It is is hardly found in any local aquarium shops even right in Australia where it originates including Brisbane, Sydney and Melbourne

As with the two other fissidens above, this fissidens can be used in almost all the same ways including to be attached to rocks and driftwood or just placed between gaps and on the foreground.

We do recommend this however more for the use on grounded areas (such as midground grounded rocks and open foreground area) over aerial areas (hanging wood, branches etc). The reason being for this is that this fissidens grows in upwards direction compared to US Fissidens and Fissidens Fox, so it is more ideal to be placed on grounded areas such as rocks and the foreground. If it is attached to aerial parts such as branches of a 'tree' for example, it does not look as beautiful compared to when using Fissidens Fox or US Fissidens.

This fissidens is ideal if you are looking for a type of fissidens that can grow into a lush fissidens or moss-style groundcover carpet. If you are using it for this purpose, we recommend using some holders to secure the fissidens in place. 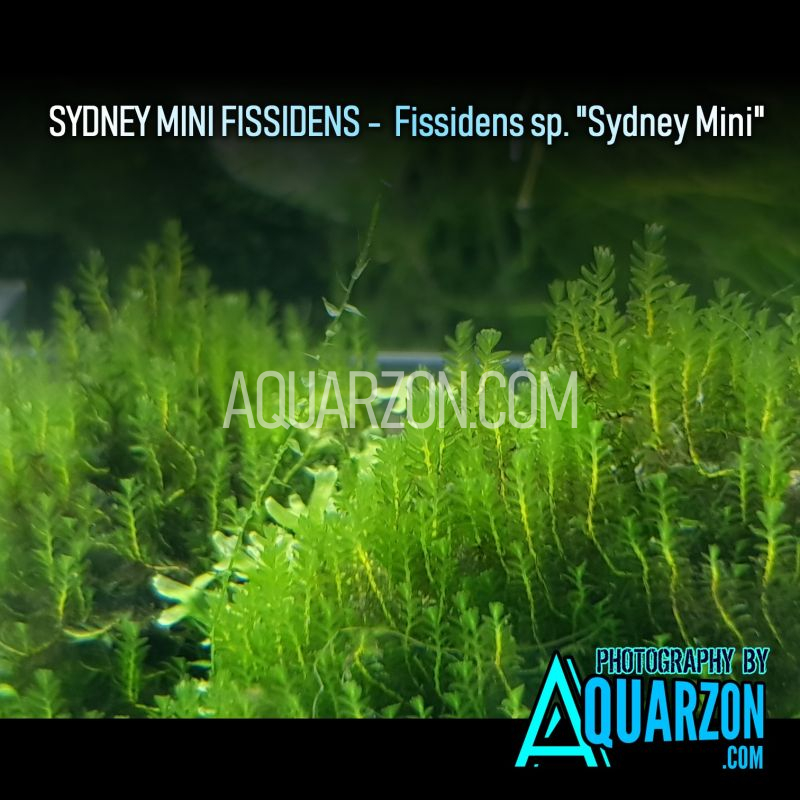 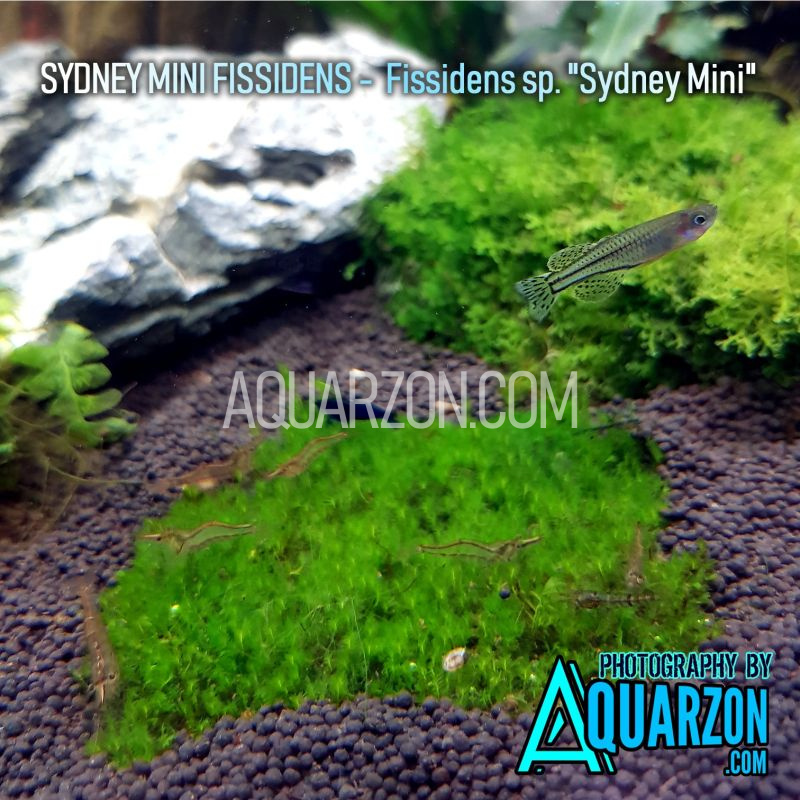 As the trade name suggests, this fissidens is a miniature type that is found naturally growing in Sydney, New South Wales.

Some hobbyists have reported seeing it growing in shallow streams in Blue Mountains and surrounding areas.

While Sydney Mini Fissidens was introduced to the Australian aquarium hobby since more than 10 years ago, it remains relatively rare in availability due to its very slow growth. Even in high tech tanks running high lighting intensity level and Co2 supplementation with aquarium plant fertilisers, it's growth is still relatively slow compared to many other aquarium plants and fissidens.

Sydney Mini Fissidens has very small leaves which are relatively deep green in colour tone. It grows at a slow to very slow growth rate and is the slowest growing fissidens amongst the 4 aquarium fissidens listed here.

It grows very compact and therefore, it is easy for the bottom part to become brown when that part is not exposed to any form of light, especially when the clump of this fissidens grow thick. As such, we recommend you to split a thick clump and spread it out once it has grew thick.

Because of its relatively slow growth rate, separation into smaller clumps do not need to be done often. We recommend the seperation to be done once in around every 2 months, depending on the level of plant growth. It is usually sufficient to avoid the bottom part from browning and dieing off.

Because of its very small size, it is not very suitable to be attached on driftwood and is also not suitable to be filled into gaps unlike the other fissidens listed here.

We recommend its best use to be for a foreground carpeting fissidens as it very small and grows very compact besides being very neat. However due to its relatively high cost, it is recommended more for smaller and nano tanks such as shrimp aquarium tanks while The Queensland Mount Glorious Fissidens is recommended for medium to larger aquarium tanks.

To recap, US Fissidens and Fissidens Fox are best used for attaching to rocks (can create planted mountain effect) and driftwood (can create tree effect) as well as to fill gaps between and as a foreground aquarium plant. The preference of one over another depends on the what type of effect that you are looking for such as whether you are looking for grows larger ajdbushier or one that grows smaller and more compact.

Queensland Mount Glorious Fissidens on the other hand is ideal for grounded areas such as in the foreground open area or midground grounded rocks as it grows vertically. Sydney Mini Fissidens can be used the same way but more ideal for small and nano aquarium tanks such as small shrimp tanks whereby a very small and very compact fissidens would match better for that.

While this feature article focuses on just fissidens, it is important to note that most aquariums look best when fissidens are used along with other types of mosses.

Peacock Moss, Christmas Moss and Flame Moss are some types which are great to complement fissidens in an aquascape. These mosses are recommended over Java Moss as they grow more compact and can complement fissidens in better harmony.  Similar to the needs of fissidens, they are non-demanding and can grow fine in low tech tanks with lower lighting and no Co2 addition. They will, of course, enjoy better and more compact growth in high tech tanks with high lighting intensity.

In the photo below, we demonstrate how Peacock Moss or Spiky Moss can be used to complement 'US Fissidens' in an aquascape. We used this combination to create a natural bush effect. The differing foliage patterns create a harmonious contrast in a natural-theme aquascape.